I subscribe to Jim Denison’s Daily Denison Forum, which addresses current news from a Christian perspective. He is non-partisan, and gives insightful presentations on how we may view what happens through God’s Word.

Today, Dr Denison is on vacation, and his son is assuming responsibilities. Ryan discusses the topic of walking away from Christianity. He makes some powerful points. I recommend this read. If you follow the link, you may read the article (4 or 5 minutes), or listen to the podcast, right from that page.

Like birds? Like kids’ stories? You’ll love Lee’s posts. She shares her knowledge of birds of the Bible.

You can go to this link and read; you can click on the Home link for dozens of articles.

I thought immediately of my sisters in the Lord, Amy and Tosin, when we had this gorgeous, HUGE double rainbow. We had three different rainshowers yesterday.  The last one was at 8:30pm, and was a whacker! 70mph winds, rain, thunder, lightning, the works. Then the sun peeked through from the west as the storm headed east, and we got maybe a half hour’s worth of staring at the most beautiful, gigantic double rainbow! It was too big to fit into our camera frames, so there are two; and, of course, a picture never does justice to the brilliance. I also took video of it (not able to post video on my blog 😕, but captured a lightning strike under the rainbow).

So, for all you rainbow-lovers out there, and especially for my beloved Amy and Tosin, enjoy the facsimile, and think on God, His brilliance, His promise(s), and His presence.

I have been attending an online, free webinar addressing Alzheimer’s, hosted by Dr. David Perlmutter. The series discusses the known causes of the disease, as well as practical steps we can take to avoid contracting it.

The topic of today’s session, Session 8, is the effects of stress on our brains and bodies. Several doctors are interviewed, and they give valid evidence of what our modern lifestyle is working in our bodies.

I was reminded, several times while I listened, of God’s admonitions throughout His Word – Old Testament and New Testament – not to worry, not to fear. God wants health for us, and part of that includes our responsibility to obey Him.

The webinar is free. You will need to sign up and give an e-mail address (I’ve had no issues of them selling or sharing or misusing my e-mail). It is a series of 1-a-day, half-hourish videos, but if you’re busy while listening, you won’t lose a lot by not watching, and only using it for the audio.

Here is the link: https://scienceofprevention.com/alz/stress-alzheimers/

We had a Sunday School lesson based on teacher and historian Ray Vander Laan’s series, ‘That the World May Know.’ I highly recommend looking into this series / these teachings. A YouTube search will offer up several videos to get you started.

This particular study was called, ‘A Well-Watered Garden.’ Mr. Vander Laan took the group in Israel to a portion of a hillside vineyard or garden (Hebrew, gan; plural, ganim).

Imagine, if you will, the land that God created for these farms. It was perfect. Did it look perfect? Not likely. The early Israelites’ ancestors had come from bondage in Egypt. They must have heard the stories of the rich farmland of the Nile River basin. They were promised a land flowing with milk and honey.

But they had spent 40 years wandering in the desert. Those desert years had taught them some things:

The desert was a wasteland. When they thought of a land flowing with milk and honey, what did they picture? Whatever met their eyes, it was better than the desert. God had promised that (Deut 6.10, 11) “it shall be, when the LORD thy God shall have brought thee into the land which he sware unto thy fathers, to Abraham, to Isaac, and to Jacob, to give thee great and goodly cities, which thou buildedst not, And houses full of all good things, which thou filledst not, and wells digged, which thou diggedst not, vineyards and olive trees, which thou plantedst not.” 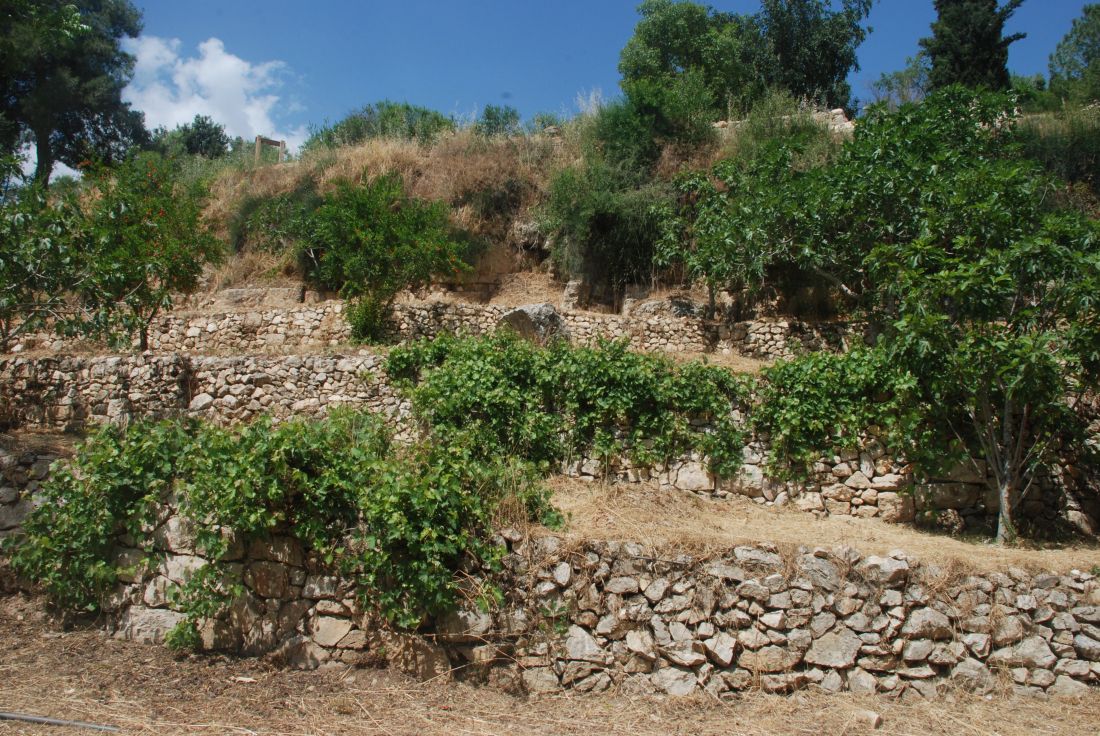 When that rocky soil and those terraces met their eyes, did they have to shift their paradigms? Were they willing to put aside whatever they had imagined, and accept what God gave them? Did they see this new land as the amazing gift that it was?

The hillsides had been transformed into terraces so the crops of figs, olives, and grapes could be grown.

I found it interesting that each family’s portion was not a vertical strip of several layers, going up the hillside, but the land they took care of and farmed was one terraced layer.

You can imagine, as folks were tending their gardens, that they would often run into each other, looking up at cousin Ashan and waving, or down at Uncle Bozkath to ask about his new grandchild.

The farmers tending their gardens had much work to do in order to reap a good harvest. And most of the work was communal work: digging cisterns and irrigation, using rainfall to best advantage, grafting plants from each other, prevention of disease and rot, harvesting and using the fruit, and maintaining the walls.

The walls had to be kept strong and firm. If the garden walls above your own crumbled, that soil and water would come pouring down to make a mess of your own garden. And a fellow couldn’t necessarily see his own wall: he would have to walk in his neighbor’s garden, below, to inspect his own walls. Most often, each gardener would keep an eye on his neighbor’s wall, and shore it up when needed. They depended on each other to maintain their walls: Uncle Bozkath kept an eye on Zanoah’s wall; Zanoah kept an eye on Ashan’s wall.

The ground these farmers used for their crops was not the rich loam we are used to seeing in modern gardens. No, these olive and fig trees, and grape vines, grow in rocky soil. When building their terraces, they were able to access a rich store of supplies in the rocky ground.

Once in a while, the soil would shift, a rock in the wall would loosen, a hole would work its way there. Accordingly, as each farmer worked his plot, he might find a rock in his soil. Those of you who garden or farm might look upon those rocks in your soil and groan. Not those Israelites. They knew they were a gift, and they knew just what to do with them: Look at your neighbor’s wall, and see where that rock fits in to shore it up and make it stronger.

I love how God gives us gifts. He gives us work to do, and the resources to use.

Some people see a rock, an obstacle, a nuisance.

Other people see a useful gift.

Who are your neighbors? What are the rocks in your life? Ask God what He would have you do.

But WordPress isn’t allowing me to post comments on your posts. 😥

I don’t know what the issue is, or how many bloggers it affects. I can post comments on Stuart’s blog, for instance (Yay, Stu! 😊), but so far, for the past two days, he’s the one and only.

I’m sorry about that. WordPress allows me to “like” your posts, and I do.

I’ll keep trying; but I wanted to let you know I’m not as silent as I appear to be.

New to essential oils? Want to learn more, or fill in some gaps?

A free essential oil master class is available from a source I trust: