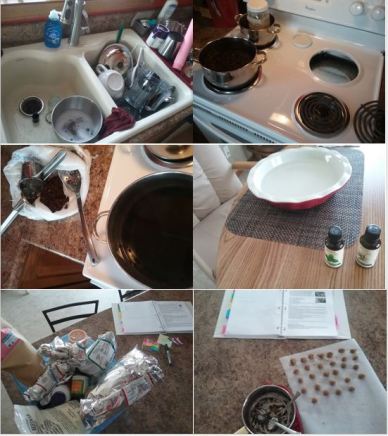 I like to make many of my own home remedies and products: skin salve and serum for my obnoxious issues; toothpaste, deodorant, lip balm, cough suppressant, cold remedies, etc. This morning I made plans to mix up a few healthy items.

The thing is, I can never plan enough time to just whip something up. I go to begin one thing, BUT FIRST I have to do this other thing. My morning was filled with that. On my to-do list was: biscuits, smoothie, Vitamin C chews, elderberry syrup, skin serum, and skin salve.

The biscuits went okay; BUT FIRST I had to prepare the dough last night so it could ferment overnight.

I made my smoothie, BUT FIRST I had to make more of my smoothie powder that I had run out of (health stuff, like slippery elm bark, ashwagandha, flaxseed, stinging nettle leaves, etc – that’s stinging nettle leaf in my sink, that flittered down all over). (The smoothie was delicious, by the way – highlight of my morning.)

I needed honey for both the Vitamin C chews and the elderberry syrup, BUT FIRST I had to slowly liquefy it in a pan of simmering water.

The elderberries and hawthorn berries had to simmer in a pot of water, BUT FIRST I noticed that something had spattered on the burner. It looked like oil, hiding in the crevices, and I thought it likely not a good idea to heat that up. So I had to scrub that down.

I planned to make the skin remedies, BUT FIRST I had to wash and dry the empty containers.

In the middle of all this, somewhere, I quickly boiled some water to make a steam tent for my husband. (We’re praying this is the worst of his burgeoning cold, and we can nip it and calm it.)

In order to make the Vitamin C chews, I had to get the recipe, which is in my binder, but my binder had a few sheets of recipes on top of it. SO FIRST I had to collect and hole-punch and organize them into the binder.

I had my smoothie and biscuit breakfast, and got the chews and syrup made. But then it was time to leave for a meeting.

I’m back now, and taking a break to write. I’m planning to make my skin stuff later today.

Some time, I’d like to plan to do something, and THEN JUST DO IT. It hardly ever happens. Things always seem to pop up to get in the way of my goal, and everything always takes at least twice as long to accomplish as I think it should because other stuff gets in the way.

The idea to post about my morning occurred to me midway through my activities. I thought about how I would word different sequences, how to convey my impatience at the roadblocks. And then I was thinking that there has to be a point to my post here. I mean, I can’t just rant and put it out there, right? Don’t I have to make some deep spiritual connection, don’t I have to present a life lesson?

Nothing really occurred to me until after I was halfway through writing this, because I was all caught up in whining for a while.

2 Peter 3.9 The Lord is not slack concerning his promise, as some men count slackness; but is longsuffering to us-ward, not willing that any should perish, but that all should come to repentance.

I look at the world and I think surely it must be time; please, Lord, don’t let things get any worse. I can think that okay, let’s get ‘er dun, we are so ready, Lord! I’ve read the Plan, God laid out His goals (John 3.16), let’s aim, shoot, and be done with it.

God does have His plans, His goals, His purposes. He also has His ways. And His ways are not our ways, neither are His thoughts our thoughts (Isaiah 55.8). He will fulfill all His promises, He will come again to judge the living and the dead, He will wipe away every tear. BUT FIRST, He has His ways and His means and His timing, of which I have no idea, and for which I cannot plan.

All I can do is keep myself in the palm of His hand and trust in Him.

Please visit my blog at https://maggietiggles.wordpress.com/ View all posts by Kathy Wire

This site uses Akismet to reduce spam. Learn how your comment data is processed.